We have a TV at home, which isn’t switched on very often. I watch the Tour de France in July on Eurosport, Doctor Who in the late Spring on BBC1, football matches when there’s a World Cup or European Championship on, the Eurovision Song Contest each year in May, the Six Nations and other rugby internationals, a general election every four years or so, and I used to watch Test Match cricket until that disappeared off to Sky Sports, which we don’t get. And that’s about it. Now I read that the BBC on Saturday put on a surprising number of programmes that I do want to watch, and as a result is apologising to the viewing public at large. Bah!

(As it happens I wasn’t at home to watch, anyway, and missed most of it, except for the second half of Ireland v Scotland in a pub in St Andrews.)

P.S. Oh, and I watched the finals of both Strictly Come Dancing and the X-Factor just before Christmas. So that’s a little bit more TV to add to the annual viewing cycle.

tehgraun has a big pic of Jonny Wilkinson on its front page (webpage, haven’t seen the paper version) with the headline “The man with the golden boot”. Were we watching different semi-finals? His kicking wasn’t actually that good last night; and while the drop-goal he landed at the end wasn’t bad at all, (i) it wasn’t a match-winning kick of the kind to get properly excited about, and (ii) the kind of possession England had at the time meant that he was pretty much assured of a regulation drop-goal opportunity some time around that point in the match.

Pretty scrappy game, I thought, especially after it settled down after a very high-tempo opening fifteen minutes or so. I’m not sure that England deserved to win it, but I know that France didn’t, and I’m sorry we didn’t really see Michalak get to do anything special.

Over here. And I foolishly decided to stay in the library, thinking that this would be the least interesting match of the afternoon. Good for the Italians.

While queuing in Glutton’s to buy beer and pasta at half-time during the Wales-Italy game (and the first Italian try was over the dead ball line), I heard the radio say that Milosevic was the first head of state to be tried for crimes against humanity. At first I thought that wasn’t true, as Admiral Dönitz was tried at Nuremburg, but I see that Wikipedia says specifically that he was put on trial for war crimes and not for crimes against humanity, so perhaps the BBC claim is right.

Even more trivia: are the people in Viking helmets at Lansdowne Road supporters of the Scottish or the Irish? I’d guess they were Scots, but it’s not obvious. At least, not to me. And a prediction: I think the Irish are going to win this one.

Possibly the best rugby international I can remember watching with no tries in it, even if the first half was only 39 minutes long. Terrific game, exciting all the way to the end, and with lots of good tackles.

I’ve just watched an appalling game of rugby masquerading as a clash between the top two sides in the Northern hemisphere. But as the author of a leading anti-English website, let me be one of the first to congratulate the French on their victory at Twickenham. 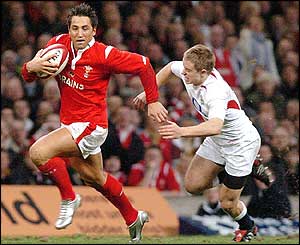 That’s Gavin Henson of Wales running past Matthew Tait, quite a while before kicking the winning goal to beat England 11-9. Pic from the BBC.

[and a reminder of why I support Wales against England these days over here.]

New Zealand 39 – 35 Great Britain. Great Britain and the United States were the two unbeaten teams in the competition going into the semi-finals — where both lost, the British going down to New Zealand and the Americans losing to the Canadians 24-20.

The medal matches take place later today: GB vs US for the bronze, followed by NZ vs Canada to decide the gold medal. Possibly on TV this evening. I’m not really sure.